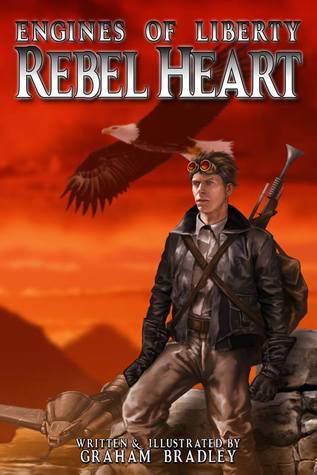 As part of the outlining and writing process for the third Engines of Liberty novel, I’ve been annotating books 1 and 2 to make sure I keep the continuity straight and deliver on the promises I’ve made. I thought I’d post the annotations here in case anyone wanted to see how I built the world and planned the illustrations.

A note on celebrity models for certain characters: while I did Google pictures of certain celebrities to use as models for the many characters in the Engines world, the annotations only name them for the purposes of showing the reader how each character came to look the way they did. I’m not actually marketing these characters as celebrities, actors, athletes, or what have you. No infringement intended, etc.

Understanding this series requires that you understand its genesis. Here are the relevant parts.

Sometimes my stories are triggered by certain visuals. I get an idea, I have to flesh it out and build a world and a story around it, and so I do. With the Engines world, I first had an image of someone in a fantasy story using math and science to build a crude mechanical replica of a dragon. They eventually got a motor and propellers in it and got it to fly. Someone else didn’t like that, so they came to destroy it. Thus, the first thing I imagined was a young man rushing to the barn on the family ranch, kicking the doors open in the middle of the night, firing up his dragon machine, and racing into the dark woods, where he was summarily chased by wizards on brooms.

I wrote that scene a couple of times and soon started to “pants” a story about it. I set up a website where I would publish the story in installments of 1,000 words or so, accompanied by a crappy illustration in black and white. The story was called TECHNOMANCER. I made it about a dozen installments in before abandoning it for a time.

Two years later, as other ideas bounced around in my head, the title “Engines of Liberty” came to mind, and I thought of the story I’d set up in TECHNOMANCER. That title was too generic, but the Engines one sounded cool. I revisited the archives of the online serial and started to make a new book, which I developed into a trilogy.

There was plenty of work to do. For one, I had to come up with better character names. Calvin Adler and Godfrey Norrington were once Leon Jacobs and Troy Hampshire. (Gag me.) Those weren’t even the worst ones. To date, the only names that have survived the transition are McCracken and Hamilton. As I fleshed out the world and the story, it soon became clear that I couldn’t open up with Calvin jumping on the machine and flying into the woods. I needed to take several steps back and work my way up to that. Thus the story arc of REBEL HEART was born.

But let’s not get too far ahead of ourselves.

–The first chapter is always the hardest one to get right, mainly because I feel like I get it right the first time—and I’m always wrong.

-In the first version, when Calvin soaks the mages with the bucket of dirty water, his immediate reaction is fear and regret and “Oh crap I shouldn’t have done that.” My brother, the Ph.D, pointed out that that was inconsistent with the character portrait I was painting of Calvin Adler, the American Rebel. It meant that his bravery was fleeting. Fleeting bravery does not pave the way for larger acts of bravery after suffering the consequences of a smaller act. I needed Calvin to tick off the mages and stand by his choice to do so.

-The other oversight was pointed out to me by Emily and Holly, my editrices: for Godfrey Norrington, the mage who would become such a powerful antagonist by the story’s end, the reader needed a greater awareness of his presence. While I felt it would be jarring to put more “Godfrey” chapters in the midst of what is truly a “Calvin” story, I did go back to the beginning and add a snippet from his perspective so that the reader would more readily remember who he was when the time came.

Both of these suggestions really improved the strength of the story’s beginning.

-Note: I Googled a list of whimsical British names for pretty much all of the mages throughout the series. If I recall, I found a name generator of some sort and pieced together the names I liked, once that sounded sufficiently Anglo, all BBC and bowler hats and monocles and whatever.

–The “Tanner’s/Adlers” piece: I used my brother-in-law Patrick as the model for Calvin. My other brother-in-law, Joseph, has been the main mold for Godfrey. It makes their conflict somewhat biblical in the end. As for Fitz and Birty, that’s author-illustrator-cartoonist-comic guru James A. Owen, alongside fantasy author maestro J. Scott Savage. They both have great talent, and I value their friendship quite a bit. That’s why their characters die such brutal deaths in this series.

I finished this drawing on what would have been my Mamaw’s birthday.

–The recruiters. Tim Thomas (goalie for the Boston Bruins), Forrest Griffin (MMA fighter), and Pat McAfee (punter for the Indianapolis Colts) provided rough models for the three recruiters. Using real people helps me to avoid drawing the same character over and over.

-This drawing was finished on my mom’s birthday.

-John Schneider and Paige Turco are Calvin’s parents. Which is weird because the drawing looks nothing like either of those people. (Crap.)

–Propaganda. Including propaganda seemed like a no-brainer. Even for an historical fiction, it seemed to frame everything in the right time and place.

–The general. A drawing of George Washington could only be an epic drawing for this book. Whether it was intended as exciting propaganda or not is up to the reader, but I wanted him reared up on a horse with a rifle in hand.

–The others. The models for the young recruits are all listed in the acknowledgements of the book, so I won’t re-list them here. Three of them are my cousins, two are nephews of friends, and the last one was modeled off of teenaged pictures of my attorney.

–Not an ogre. Sometimes I wonder if people will look at the propaganda rendering of King George and get the wrong idea, so here’s clarification: in the Engines world, King George is not actually an ogre.

–Architectural adjustment. No way is Mount Vernon large enough to fit an amphitheatre of that size, along with all of the other stuff I cram into it as the series unfolds. It doesn’t matter. I don’t establish its finite dimensions in the series, as it’s unnecessary. I feel like I did a good enough job showing the reader what they needed to see as it goes.

Established: the history of the first revolution. The Brits used propaganda against the colonials, and the fact that people actively resisted their own liberation brought Washington’s downfall.

–Training camp. I’ve read a handful of military non-fiction from retired SEALs, so I got a sense of the toughness of their BUD/S training and the like. It’s insane. What the technomancers endure is maybe a tenth that difficult, because I didn’t want to overdo it, but I did try to capture that same sense of fatigue mixed with urgency.

–Livestock. In the boar pen scene, the recruits originally had to run through a stampede of ornery cattle. My wife read that chapter and laughed it to scorn (she grew up on a dairy.) Ultimately I had to change “cattle” to something meaner and more prone to charging.

–Desertion. Calvin making the choice to ditch the army was not one that I had originally planned on him making. He truly came alive for me in this chapter; he didn’t have the stomach to put up with other peoples’ crap, so he decided he was out, just like that. Of course, then the challenge became: how do I get him to stay?