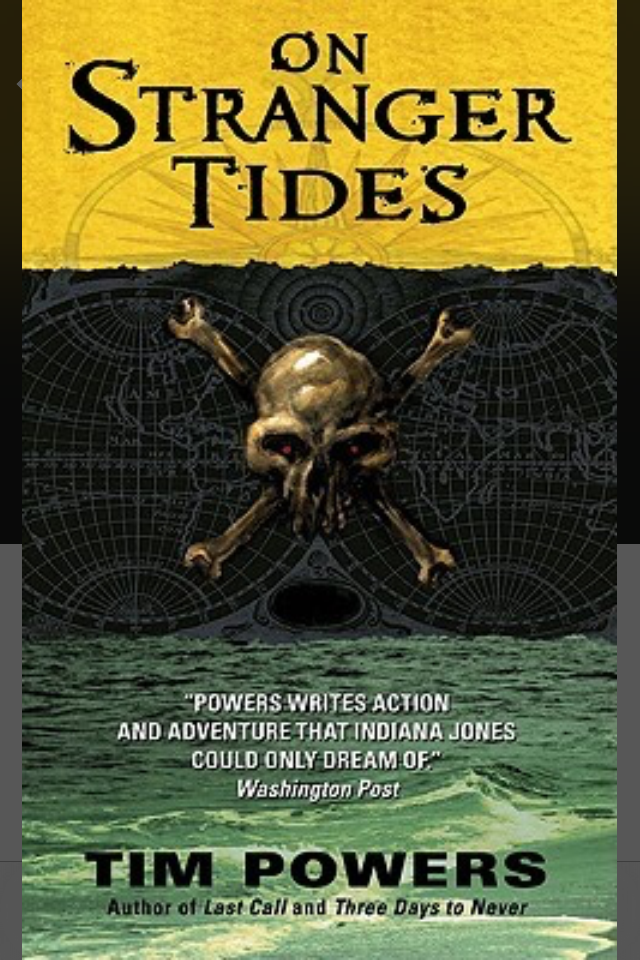 2011’s Pirates of the Caribbean: On Stranger Tides was based on a 1988 novel by Tim Powers. However, similarities between Powers’ novel and the 4th Pirates film are scant, while elements of the prior 3 movies can be found in the story. I’m of the suspicion that bits of the book were borrowed somehow, until they decided to finally do “the whole thing,” only to realize that they had very little left.
Regardless of my mixed emotions over the Pirates franchise, this book is superb. I recommend the audio, because Bronson Pinchot does AMAZING voices.
Premise: Jean Chandagnac is en route to Haiti from France to settle family business with his uncle. Benjamin Hurwood is in the New World experimenting with voodoo, so he can resurrect his dead wife. Elizabeth Hurwood, his daughter, is meant to be voodoo fuel for this act, but she doesn’t know. Leo Friend intends to steal Elizabeth and use her to resurrect his dead mother, with whom he has an Oedopian infatuation. And Edward Thatch–aka Captain Blackbeard–means to outwit them all, to achieve immortality. As Jean Chandagnac is pressed into service with the pirates, he soon develops a plan of his own to save Elizabeth.

And it all goes sideways from there.
Setting: Jamaica, Florida, Haiti, and everywhere in between, in the early 1700s.
Genre: Historical fantasy
Lesson: Oh jeez…play the hand you’re dealt, I suppose. Jean–later named Jack Shandy–doesn’t ask for any of this, but he takes it head-on.
My favorite character: Jack Shandy was great, but I think I will go with pirate Captain Phil Davies. He’s wily, and I like that. A daring gamble to save his own neck from the British Navy really brings him alive in the book.
Content warning: This is a violent book, and the battles and action are portrayed with tooth-cracking realistic detail. Also, Leo Friend’s Oedipus complex is pretty gross. You’re given no reason to like the dude. It doesn’t feel egregious, but it’s definitely cringeworthy. My only real knock on the story.