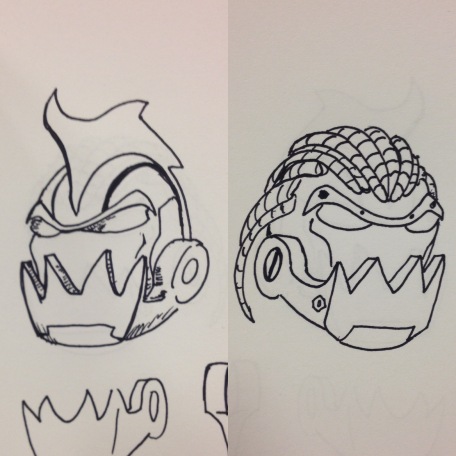 Well, that’s 1/12th of the year down. My only 2018 resolution was to set monthly goals instead of yearly ones. Really I have enough tasks on my plate to focus on that I don’t have to worry about “resolutions,” I just have to get stuff done.

On the List Of One Million Things To Tackle is the image above. I’ve been meaning to do a better logo for DreadPennies, and I think I’m finally carving it out. The “Dreads” are going to be grumpy little robots that I draw every now and then. I’m trying to decide between a Buzzsaw Mohawk or Cable Dreadlocks and to be honest I think I’m just going to say “Screw it” and do both. The logo can be a Dread without any metallic hair, and I’ll draw Buzzsaw or Cables when I frigging feel like it.

Speaking of drawing, if you’ve seen my Instagram, I did a lot of these Colts/Avengers mashups during January, but I kind of ran out of steam on it. Still plenty of ideas for it, but it’s not a priority, there is other stuff I can draw that will help me practice speed and coloring. But here are some of the better ones:

So far I’ve read like eight or ten books this month but only a few of them have been good. Notable entries are CALVIN by Martine Leavitt, and IRON GOLD by Pierce Brown (which I expected to like anyway.)

Also I haven’t really been working on a writing project because I’m trying to focus on studying for a test I have in three weeks. Job-related. Pain in the butt, but there’s a hefty pay raise tied to it. Priorities.

That said, I took a breather this weekend to outline a series I’ve had in my head for about 5 years now. Tons of fun, it’s equal parts superhero/G.I. Joe, but I’m trying to take a direction that’s different from DC or Marvel, only because we’re a bit saturated by both (and only one of them is any good right now.)

My next published book is called HOMEWORLD, about an alien invasion of Earth. It’ll be art-heavy, and reads like a series of deep Web blog posts. I’m excited about this one, it’s another idea I’ve had for years. Release date pending.

Last of all, you probably heard that my “Blast Crew goes to Mordor” story got rejected by my publisher of choice, which really sucks, but it’s under review with an agent right now and I expect I’ll hear back about it in another few months. Iron is in the fire.

Thanks for reading, you guys. Sound off in the comments.