I’ve shared Jake’s videos before, he compiles vintage old music and puts it on YouTube. Some copyright holders have been hitting his videos with strikes and claims, even though a huge majority of the music is supposed to be in the public domain by now, and all of the individual tracks can be found ELSWHERE ON YOUTUBE. Ugh.

Anyway, he just uploaded this video and included a link to a website where you can still listen to his themed playlists episodes.

I may not be a synth nerd like Deseret’s Resident Therapist, but I appreciate some digital music every now and then. Stranger Synths on YouTube has a few of these hour-long mixes with eye-melting visuals that make for good ambience while you’re doing other stuff. Highly recommend.

Had a glitch last week with some Radcracker stuff, but it’s all sorted out now. The last three episodes are live in their entirety.

As to the most recent one, I mentioned a summer music playlist. Here’s the YouTube version:

Also, I just hit 9,000 all-time listens on that show. Thanks everyone.

Not really techno, more like a bass thumper, but the aesthetic and the music in this one is awesome. Really good background noise.

Most of these hour-long music mixes are set to simple repeating videos that loop the same few seconds over and over. This animation sequence lasts several minutes, and only repeats a few times throughout the whole video. It’s kind of mesmerizing, and I dig the soundtrack.

Celebrate with me, January is finally over! One of the two most miserable months of the year, the other one being August. The first is cold and joyless, the second is hot and joyless, it is what it is. Here’s what I did last month: 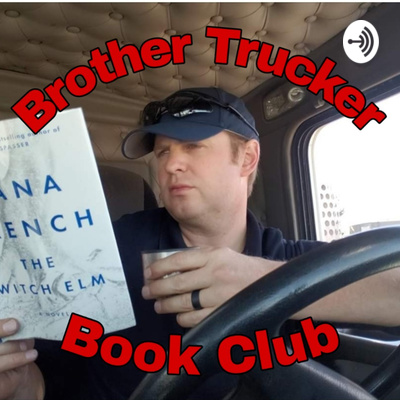 Putting out 3 episodes proved to be much better than doing 13. So far I like that format. The first two episodes saw the passing of Mike Resnick and Christopher Tolkien (who I have read) and the third episode dropped right at the passing of Mary Higgins Clark (who I have not). A solemn month for legendary writers in their genres.

Right now I’m reading an old Resnick title that I never got to, and I’m already enjoying it tremendously after one chapter. The man uses dialogue like surgeons use scalpels.

Be sure to subscribe to the Brother Trucker Book Club Podcast wherever you listen to podcasts. Thank you, listeners!

My #draweveryday challenge was a success! 31 new pieces of varying quality made it into my sketchbook, or into the digital archives as the case may be. Check out instagram.com/dreadpennies to follow along.

The above image was by far my favorite. I got to sit in a safety class for three days at work, and had this idea after seeing an article that said Texas legalized the hunting of feral pigs from a hot air balloon. Story Idea!

So I drew it as I listened to the instructor drone on about the importance of not running people over with your truck. (I had heard this information before.)

As for this challenge in February, check out the video below:

I admit I wish I had finished a draft of WITH ANSWERABLE COURAGE this month. To be honest I’m having trouble finding a balance between the new job at Krakengard and my responsibilities at home, but I think things are finally clicking. Just gotta grab life by the face and slap it around a little bit.

That said, I’m three chapters away from having a draft down, and then I’ll switch gears to the illustrations. Still looking at a post-Halloween release date.

I’m also–and this is very tentative, I don’t have details for you–beginning the preliminary stages of developing an audiobook for SLEEPLESS HOLLOW. Cannot wait to have that one out there in my favorite format.

Last year I lost 20 pounds and then found them again in about 5 months, so believe me I’m pretty mad about that. I blame the new job, which is exceptionally less physical than the old one. I’ve finally figured out what to do about that, and if you care to follow along my fitness journey, check out @batteringraham on Insta.

Really we’re just gearing up for the baby to come, which feels like it’s taken forever, and I’m not even the one who has to carry her all the time. Ugh you guys, my poor wife…almost there. Home stretch.

In the meantime, GUYS check out this great YouTube Channel I found and totally love: it’s called Ambient Worlds, and the guy puts together these hours-long videos of movie soundtracks with nice sound effects in the background. For example, he’s got mood music for each of the Hogwarts House common rooms, with fires crackling and whatnot. He also has videos for Gondor, Rohan, the Shire in Middle-Earth, or stuff for the Hunger Games, I mean…everything. It’s just beautiful. I’ve been writing to it and I love it.

Okay time to get back to work. If you’ve read any good books lately, comment below! I’m always on the hunt for a recommendation. I’m trucking full-time, last month I read 15 books, I can probably get to yours 😀

I’m on mobile so I am not sure if the link embedded the video. It’s from the light cycle fight in TRON Legacy.

It’s already been 8 years since that movie came out. I had always heard of the original from the 80s, and I watched it before seeing this new one, in case I missed the story.

Truth be told, the sequel was kind of a mess. Disney had this old IP lying around and thought hey, we can do a sequel! Or a reboot! Or an updated version of the original, with new graphics!

Worst of all, we could try all three.

Scene for scene, it’s almost exactly the original movie, but with much better graphics. Even dialogue beats are copied. Visually it is stunning, narratively it doesn’t really seem to know what it’s after, other than your cash.

The one unassailable component is the score, by Daft Punk. Perfectly fitting, and always good for a listen. I just bought the CD the other day.

Disney has tried to do a third movie, and even had a cartoon spinoff for a while, but I think the sad truth at this point is that they have a cool concept, a cool world, but not a cool enough story to sell it all.

At least we got Daft Punk, though.

Full confession: I have no idea what this song is about, it just sounds like a guy who really likes this girl he’s with, but he freaks out over stuff and she’ll probably leave him, so he’s trying to head her off at the pass.

That said, I dig the sound. I’ve never really been a fan of Awolnation but they have a unique flavor to them. That or I just don’t listen to a lot of that genre, whatever the heck it is.